Richard Johnson worked in wildlife conservation from 1990 – 1995 mainly in Zimbabwe, and also in South Africa.

For the endangered Black Rhino, this involved a population survey on foot in the remote Chete area of Zimbabwe, followed by help with de-horning and moving of Black Rhinos to safer areas.

In Hwange National Park, Richard, with a group of conservationists, carried out in depth studies of the presidential elephants, eventually being able to individually identify over 200 elephants. “It was fascinating to follow the lives of the close-knit family groups,” reflects Richard.

To this day, Johnson Baker continues to support this conservation work, both through the company and the owners. This takes the form of donations and support to small, focused NGOs in Zimbabwe, and supplying equipment to anti-poaching patrols. 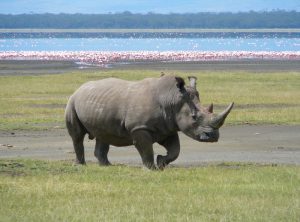 The history of Johnson Baker:

With Johnson Baker now over 80 years old, we’ve dealt with a lot of strange requests over the years, leading to us packaging a variety of weird and wonderful things! After the fall of the Berlin Wall, an enterprising firm, started by a man putting pieces of the Berlin Wall in the boot of his